The process I went through was:

Then edit ~/.config/touchegg/touchegg.conf to apply the changes you want.

You'll get some decent gestures by default.  See here for more information on tweaking touchegg.

Out of the box the touchpad is barely useable, but after following these instructions I'm very pleased with it.

Then check the status of your hci device(s):

In my case, hic0 was software-blocked by default, so typing the following command unblocked it:

For more information on linux bluetooth, see this article.

I'm running fluxbox instead of Unity, and GDM instead of LightDM as my login manager.

To install fluxbox, just type "sudo apt-get install fluxbox" and then next time you log in, you can click on "sessions" in GDM or LightDM and select fluxbox.

To install GDM or SLiM or another login manager, install it through apt-get, and the installation process will prompt you to choose with login manager you want to use as your default.  If you want to change your selection after you've installed another one, type "sudo dpkg-reconfigure GDM" and you can change it to another one.

I enjoy the fluxbox keymapping functionality.  You can run "xev" in a terminal to see what keycodes specific button presses fire.  So, for example, running "xev" and pressing the battery icon on the function key panel, I can see it returns keycode 235.  So in ~/.fluxbox keys I've added the following line:
235 :Exec sudo pm-hibernate

...which makes pressing that key invoke hibernate mode.  For that to work, though, you need to change your sudoers config to not require a password for that command.  To do this, you can create a file called "power" in /etc/sudoers.d/ with the following line:

Be careful doing this!  You should use visudo rather than a normal editor (as it will validate before writing, and you should not edit /etc/sudoers directly, but rather create a new file in /etc/sudoers.d

EDIT May 7 2014:  I discovered a simpler way to hibernate.  You can just do "systemctl hibernate" as a non-root user, and it should work without mucking around with permissions.  I'm on Arch now though so I can't confirm it works in Ubuntu.

I'm running the following applets in my systemtray in fluxbox: 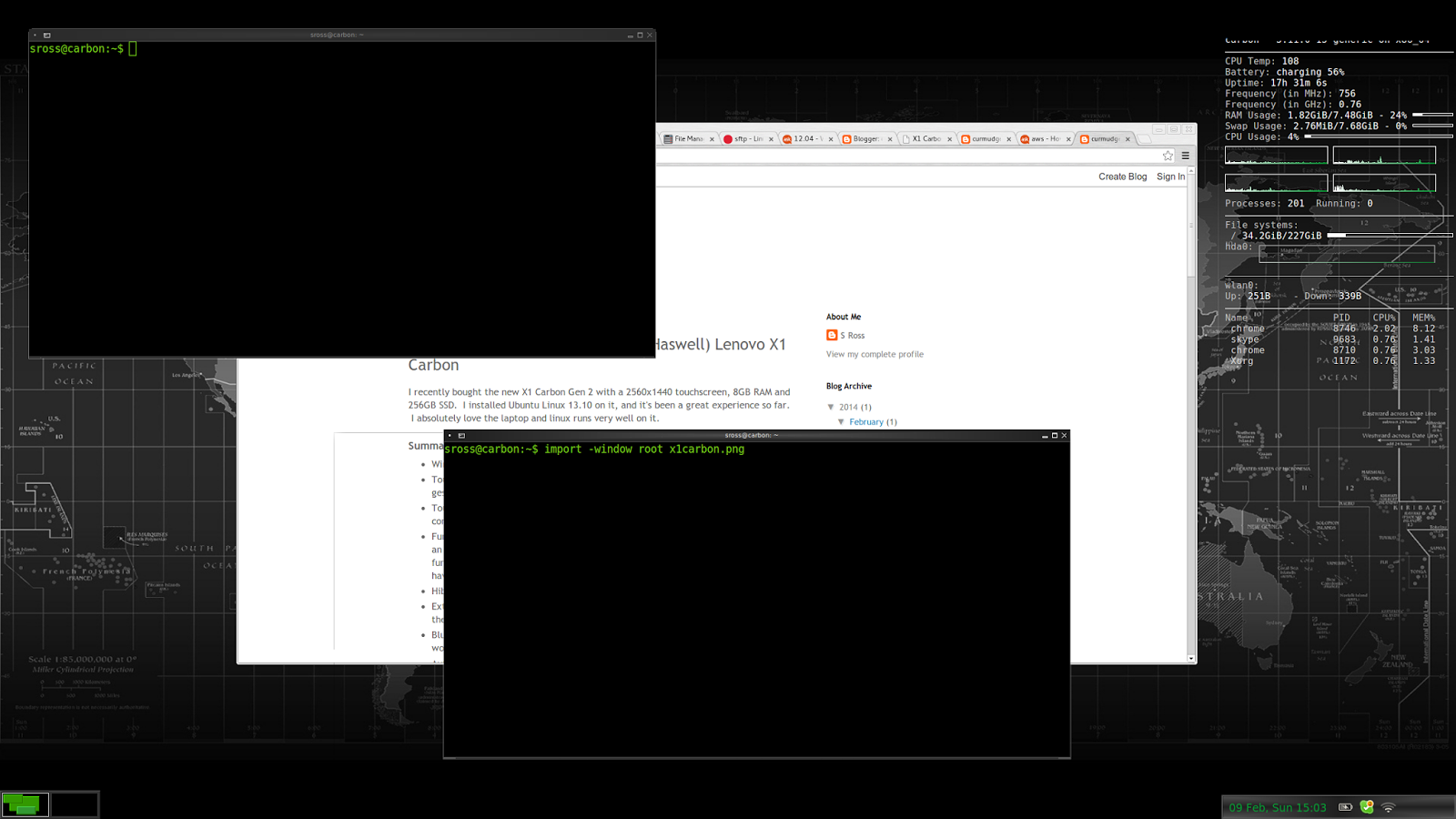 By default my kernel parameters in GRUB are set to "quiet splash".  For some reason if I use "nomodeset" (to get a text-based login rather than graphical) then hibernate doesn't work.  No idea why that would be but I didn't spend much time on it.

I ordered a OneLink Dock Pro along with the X1 Carbon.  It arrived just this weekend, much later than the laptop itself.  Plugging in a monitor (1920x1080) to the dock's DVI port worked out of the box, as did USB 2.0 mouse and keyboard.  USB 3.0 hard drive also worked out of the box.  I did not test the DisplayPort connection yet, but I have a DisplayPort->HDMI adaptor on order so I'll give that a try soon.

The picture on the external monitor is not that great, somewhat "washed out" in appearance compared to the identical monitor hooked up to my desktop running Win8 sitting right next to it, using the DVI port on the NVIDIA GPU of the desktop.  I'm not sure why this is yet, or whether it'll possible to fix it.  I tweaked the brightness and contrast and it improved, and it doesn't really bother me, but it's not as nice as I'd hoped.  The "washed out" look is the same using the HDMI port on the laptop itself, or the DVI port on the dock.  I do not have a monitor with DisplayPort connection to test and, as noted above, I couldn't get the mini-DisplayPort on the laptop itself to work (I was using a mDP->DVI adaptor).

I ordered a DisplayPort to HDMI adaptor which came in the mail today.  I'm trying to run 2 1920x1080 monitors connected to the Onelink Dock Pro, one connected to the DVI port on the dock, and the other connected via the adaptor to the DP port.  I get picture on both external monitors, but they're mirrored and I can't find a way to treat them as separate displays.  If I run "xrandr -q", only 1 device is detected for the two ports (DP2).

If I look at /var/log/Xorg.0.log, the manufacturer info for the monitor I plug in first is detected, the second one is not shown.  This seems to indicate the dock is getting only 1 true video port sent to it, and then doing some kind of splitting.  There is a windows driver for the Onelink Dock Pro that I suspect somehow lets the OS treat the one video output stream as two distinct screens, but no joy for Linux.  Had I known that, I might've gone with the cheaper Onelink Dock with just one video port.

The issue may actually be with the Intel 4400 integrated graphics, though, because I also tried connecting one of the monitors to the onboard HDMI port, and it doesn't work while the laptop is plugged in to the dock, but works fine when I unplug the dock.  So it could be that the intel gfx driver for linux doesn't support 3 displays (although the windows driver apparently does).

Ah well, guess I'll have to wait for either an intel driver that supports 3 displays or a linux driver for the Onelink Pro Dock.

I got confirmation from one of the devs working on the i915 driver that 3 displays should be supported for the 4400, so I tried a newer kernel and it's still not working.  The behavior is:
I've ordered an "active" DP->DVI adaptor, and I'm hoping that'll solve it.  The 4400 has two pixel clocks, so in order to support 3 displays, 2 of them have to be sharing a pixel clock.  I'm hoping the active adaptor will allow one external monitor to share a pixel clock with the built-in laptop panel.

I tried the active DP->DVI adaptor with the Onelink Pro Dock.  Behavior is the same.  I did notice that when the 2nd external monitor is plugged in, I get another resolution option for "2560x1024" in xrandr, and if I select that, it does extend the picture across the two instead of mirroring, but that resolution is very poor.  I tried manually adding a resolution of 3840x1080 but that didn't work.  No idea at this point where the real problem lies, so not sure what to try next.  Might be stuck with 1 external monitor.

I can confirm it's possible to drive 3 displays with this set-up:
I'm running Arch Linux now, though, so apologies I can't offer a suggestion to ubuntu users.  I did try this set-up on Ubuntu 13.10 and it didn't work for some reason, but I never tried it on 14.04 before I switched to Arch.

I would of course rather use two video outputs on the Onelink Pro Dock, but apparently it uses an MST Hub to drive mutliple displays, which is not supported yet.  I can only get two external displays to be mirrored that way (and they show up as one display in xrandr as discussed above).
Posted by S Ross at 11:45 AM